1 in stock (can be backordered)

Renowned knife author Joe Kertzman wrote in Blade Magazine in Feb 2007 and said; “With input from Kenpo (A Japanese Martial Arts Form) and police instructor Jed Lewis, Leo (The Lion) Espinoza designed the TOPS Knives California Cobra as a self-defense tool. TOPS soon discovered, however, that the design lended itself to utility applications as well. The integral ‘Cal. Cobra’ sports a pronounced re-curved blade that is double-edged, with roughly the first two thirds of the blade spine, from tip to back, sharpened. Additionally, the integral finger guard is spiked at the end. This is truly a very clever defensive tool, which when used properly, will definitely assist the carrier of this knife. Six months of design and testing produced the California Cobra with both back and front cuts, plus an integrated Pressure Point Release.”

Note: Leo Espinoza the VP of Operations for TOPS, is also an accomplished knife designer and custom knife maker.
The California Cobra is a radically new design with less than lethal utilization for self defense. For civilians, male or female, as well as law enforcement. It offers more options than a standard utility tool. It has the capacity to be utilized with minimal training, to exert concentrated, powerful point pressure on the aggressors hands or forearms to cause a faster release of the opponents grip, without having to cut or slash the aggressor. The Cal Cobra may be worn around the neck, and under a shirt or on a belt. It has a very low profile and sits flat against the body. It has a Kydex sheath with an adjustable steel spring clip. Measuring only 6″ long and 3/16″ thick, it is strong, compact and facilitates fast defensive moves. This Tool is made in the USA with pride and great craftsmanship.

Thank you for the excellent service

My axe showed up a day ahead of schedule and is a real beauty. Thank you for the excellent service and rocketship fast shipping. 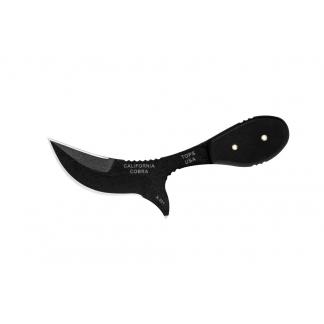