The Flavor, Nutrition, and Craft of Live-Culture Foods by Sandor Ellix Katz

Since its publication in 2003, and aided by Katz’s engaging and fervent workshop presentations, Wild Fermentation has inspired people to turn their kitchens into food labs: fermenting vegetables into sauerkraut, milk into cheese or yogurt, grains into sourdough bread, and much more. In turn, they’ve traded batches, shared recipes, and joined thousands of others on a journey of creating healthy food for themselves, their families, and their communities. Katz’s work earned him the Craig Clairborne lifetime achievement award from the Southern Foodways Alliance, and has been called “one of the unlikely rock stars of the American food scene” by The New York Times.

Bread. Cheese. Wine. Beer. Coffee. Chocolate. Most people consume fermented foods and drinks every day. For thousands of years, humans have enjoyed the distinctive flavors and nutrition resulting from the transformative power of microscopic bacteria and fungi. Wild Fermentation: The Flavor, Nutrition, and Craft of Live-Culture Foods is the first cookbook to widely explore the culinary magic of fermentation.

“Fermentation has been an important journey of discovery for me,” writes author Sandor Ellix Katz. “I invite you to join me along this effervescent path, well trodden for thousands of years yet largely forgotten in our time and place, bypassed by the superhighway of industrial food production.”

The flavors of fermentation are compelling and complex, quite literally alive. This book takes readers on a whirlwind trip through the wide world of fermentation, providing readers with basic and delicious recipes-some familiar, others exotic-that are easy to make at home.

While most of the conventional literature assumes the use of modern technology, Wild Fermentation focuses more on the practice and culture of fermenting food.

The term “wild fermentation” refers to the reliance on naturally occurring bacteria and yeast to ferment food. For example, conventional bread making requires the use of a commercial, highly specialized yeast, while wild-fermented bread relies on naturally occurring cultures that are found on the flour, in the air, and so on. Similarly, the book’s instructions on sauerkraut require only cabbage and salt, relying on the cultures that naturally exist on the vegetable to perform the fermentation.

The book also discusses some foods that are not, strictly speaking, wild ferments such as miso, yogurt, kefir, and nattō.

Beyond food, the book includes some discussion of social, personal, and political issues, such as the legality of raw milk cheeses in the United States.

Newsweek has referred to Wild Fermentation as the “fermentation bible”

Pleas note that while we may not agree with Mr. Katz worldview his book is of use to anyone interested in natural fermentation.

There are no reviews yet.

Be the first to review “Wild Fermentation:” Cancel reply

Got my order. I like the lights I had 2 of the older ones and the new ones are much brighter.
Thanks 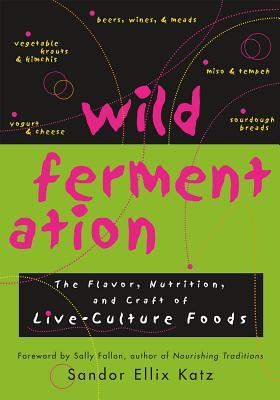